The Rest of 2008 Upper Deck Documentary 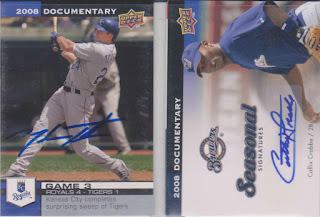 For starters, the photo on the front of the card has nothing to do with the game documented. For Teahen's card, there is no mention of him in the write-up on the back. It is only about Zack Grienke. Secondly, the same photos got used on multiple cards. The Teahen photo is used on at least ten different cards. And my least favorite part about the set is that it doesn't tell you who is actually pictured on the card. The only name listed anywhere on the Teahen card is Grienke's. So, while Upper Deck had a great idea for a card set, they executed it very poorly and Documentary was a one and done set.

Mark Teahen- I got this card signed at the Metrodome in 2009 at the final regular season series at the "park".

Callix Crabbe- I bought one pack of documentary and I pulled an auto. Yay me! Callix never played a Major League game with the Brewers, but did see some time with the Padres.
at 11:29 PM