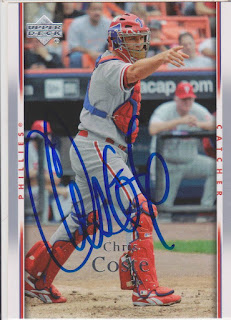 Here is the first of three cards that I got signed by Chris Coste this past summer. Chris joined the Fargo-Moorhead Redhawks coaching staff prior to this past season and I was able to get him at a Wingnuts game one morning. That's right, it was at a morning game. The Nuts hosted camp day at the park and a bunch of daycares and YMCA clubs showed up to a really hot day of mid-week morning baseball.

Chris is from the Fargo-Moorhead area and it was cool to see him with the Redhawks, a team he used to play for. Tim was born in Fargo and played college baseball in Moorhead. He then played with the Redhawks for four years before getting signed by the Indians prior to the 2000 season. He then played mostly AAA ball for five years before making his Major League debut with the Phillies in 2006 at the age of thirty-three.

The best season for Chris was probably his rookie season. Though he played in just 65 games, he hit .328 with 7 homers and 32 RBI. He would never hit over .300 again and he would only top his home run and RBI numbers in 2008 when he would play in a career-high 98 games.