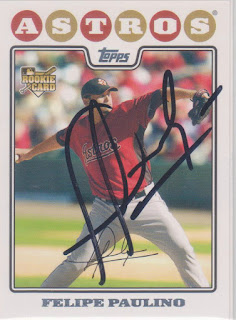 Here is a card that I got signed at a Round Rock Express game in 2008. I was on my way down to my Grandma's and I made a pit stop in Round Rock, Texas to catch the Astros AAA franchise. I absolutely loved the park and I did alright on the autographing front, too.

The best part of Dell Diamond, from a 'graphing standpoint, was that the clubhouses were both in left field and the players actually had to walk across the concourse to get to the field. There was no way for them to sneak around and get onto the field without crossing it. It was great. Even if they took the back door, they still had to cross the concourse before hopping the fence to the bullpen, which I saw Burt Hooten do.

So far, that is the only AAA park that I have been to that has that configuration. Werner Park in Omaha comes close, as it too has both clubhouses behind left field. But, they get a ramp that heads under the concourse. It is still a great place to 'graph, but not quite as good as Round Rock. With Wichita getting a AAA team next season, I was hoping that they would set up the clubhouses in a similar fashion. But, they are going the traditional route and putting the clubhouses behind the dugouts.

I have mentioned before that I somehow manage to get a decent amount of autographs by players that later become Royals. This is another example of that.
at 9:02 AM