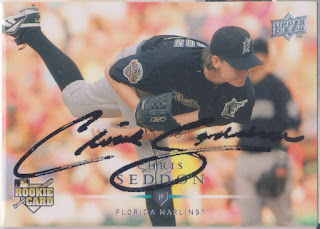 Here is a card that I got signed at a Round Rock Express game that I attended in 2008. Chris was playing for the visiting Albuquerque Isotopes at the time. I did not catch him pre-game, but he was pointed out to me later as he was charting pitches in the stands. You never know how a player is going to be while he is charting pitches, but Chris was nice enough to sign this one card for me.

Chris played in the Majors in parts of three seasons that were spread out over five years, seeing time with the Marlins and Indians. Over that span, he appeared in 38 games and was 2-3 with a 5.47 ERA. His best season was with the Tribe in 2012 when he racked up a career best 34.1 innings and a 3.67 ERA.

After his stint in Cleveland, Chris took to the international circuit and played one year in Japan and three in Korea before calling it a career after the 2016 season. He coached in the Angels organization in 2018, but I could not find any info on him for this past season.

I wish I would have prepped this card and then used a blue Sharpie. Luckily, his great looking signature helped to make up for my short-comings. It almost seems that his sig was made to sign horizontal cards.
at 12:18 PM