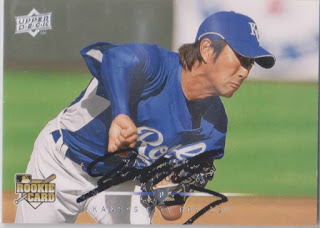 Anyone remember this guy? Yaz was the Royals first, and so far only, foray into bringing a Japanese player over to the States. It did not fare too well for the franchise or the player.

At the time, the Royals were under the helm of Trey Hillman, who himself had come over from managing in Japan. Trey had nothing but great things to say about Yaz and was surely instrumental in getting him for the Royals. But, Yaz struggled to find the strike zone in the Major Leagues and he struggled as a result.

In 2008, his first season in America, he appeared in 31 games for the Royals. He logged 37.2 innings of work and was 1-3 with a 4.78 ERA. While that ERA is on the high side, it was about par for the course for a Royals relief pitcher at the time. But, like I said, he struggled with the strike zone and walked 17 batters while only striking out 25. He did even worse in 2009 while only appearing in 12 games for the Royals. That year, though, he went 2-1 with a 13.50 ERA in 14 innings of work. His walk rate was a bit worse that time around as he walked 7 and struck out just 9 batters.

After that season, the Yaz Yabuta experiment was over and he went back to Japan. In 2011, he had his best season ever when he had a 1.75 ERA and 31 saves for the Chiba Lotte Marines.