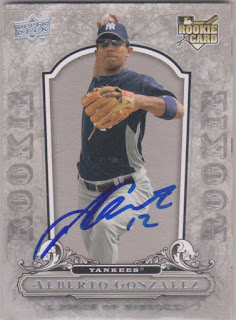 Here is the third card of Alberto Gonzalez that I have posted on here. But, since this is the only card from this set that I have signed, the first two cards were all part of a "Rest of" round-up. That way, I would only have to do one post of Alberto. The first card I posted can be found in this '08 Bowman post and the second one in this '08 Topps post.

Nearly all of Alberto's cards are from 2008, so I was surprised that he played in the Majors for parts of seven seasons with the Yankees, Nationals, Padres, Rangers, and Cubs. Over that time, he played all four infield positions over 426 games. He was a .239 career hitter with 4 home runs and 91 RBI. His best season was with the Nationals in 2009. That season, he played in 105 games and got a career-high 291 at-bats. He responded with a season best average of .265 with a home run and 33 RBI.

2013 was his last season in the Majors. By 2015, he had fallen down to the independent American Association. He spent 30 games with the Wichita Wingnuts that year and that was how I was able to get the cards signed. The Tigers ended up signing him mid-season and he would play some AA ball in their organization before getting released in early 2016. That was the last year that he played affiliated ball. Since then, he has only participated in the Venezuelan Winter League.
at 9:44 AM