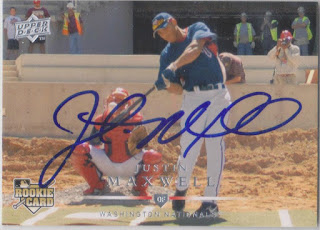 Here is a card that I got signed outside of Kauffman Stadium in 2014 while Justin was with the Royals. He got dropped off at the park that day and was nice enough to sign all three cards for me.

I like to think that signing autographs is good karma and that the player usually has a good game after signing earlier in the day. That was not the case for Justin. He got the start in right that night and went 0-3 against Clayton Kershaw and the Dodgers. He made one more start for the Royals four days later before being shipped to Omaha for the remainder of the season while the rest of the club went on to the World Series.

Justin played in the Majors for parts of seven seasons with the Nationals, Astros, Royals, and Giants. Over that time, he was a .220 hitter with 41 home runs and 133 RBI. His best season was with the 'Stros in 2012. He played in a career high 124 games that season and responded with 18 dingers and 53 RBI.

Speaking of dingers, I got to see Justin hit a memorable one with the Royals in 2012. It was a Sunday afternoon in late September against the Rangers. James Shields and Alexi Ogando were the starting pitchers and they each cruised through their outings without allowing any runs. The bullpens took over and took a 0-0 game into the tenth inning. In the bottom of the tenth, the Rangers bullpen started to falter as Neal Cotts and Joakim Soria loaded the bases with nobody out. Joakim then induced a foul pop and a weak ground ball for two easy outs and was on the verge of getting out of the inning. But, Justin Maxwell came up and battled. He worked the count full before sending the sixth pitch of the at-bat about 400 feet to left field for a walk-off grand slam. It was phenomenal! That was the second walk off granny I had ever seen and, coincidentally, the second walk off granny Justin had hit.

I love the picture on this card. Apparently in 2007, the Nationals had the chance to head over to the then under construction Nationals Park and take some batting practice. Luckily, Upper Deck added this card to their set.
at 12:05 PM