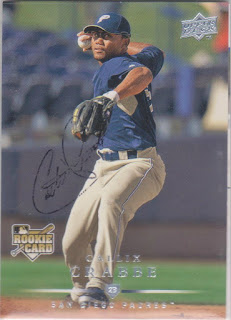 Back-to-back Padrographs! Ten years ago, that was a regular occurrence. Nowadays, they are few and far between. But in 2009, they were so common that I started to post two cards a day- one Padrogarph and one non-Padrograph. That was back in the day when not only did I have time to post daily, but I could bust out two a day. The times sure have changed. Anyways, here is the card of Callix Crabbe that Rod sent me way back when.

Callix was a Rule V pick of the Padres prior to the 2008 season. He made the team's roster out of Spring Training and got into 21 games with them. Unfortunately, those 21 games would be the only time that Callix would see the Major Leagues. During that time, he hit just .176 with a double and 2 RBI. On May 16th of that season, the Padres returned Callix back to the Brewers organization.

He would spend the rest of '08 in AAA before getting let go by the Brew Crew. He would play three more years of professional ball before hanging up the cleats.

Unlike many of the guys that I have posted that had rookie cards in this set, Callix actually got a Topps base card as well.
at 11:10 PM