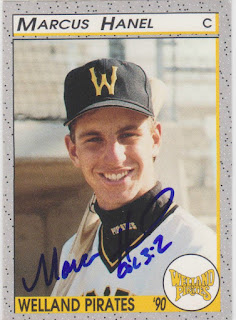 Here is kind of an oddball minor league team set that I have laying around. I mentioned in a post from a couple of weeks ago that I stocked up on holiday card stockings a few years back. In each stocking was an older update/traded set, a minor league team set, and some junk wax. This card came out of one of those random team sets.

Before I got this set, I had never heard of the Welland Pirates before. I hadn't even heard of Welland before. It turns out that Welland is in Ontario and the Pirates played in the New York-Penn League for six seasons in the early '90s. The team never finished above .500 and ended up moving to Erie and joining the AA ranks.

My son got this card signed for me at Spring Training this year. Marcus is the bullpen catcher for the Brewers and he signed for us before a games against the Reds at Goodyear Ballpark. We never would have got this card signed if not for another father/son duo that spotted Marcus and got him to come over and sign for my kid. I was busy 'graphing the home team that day and I put the kid to work for me. He got paid a dollar an autograph.