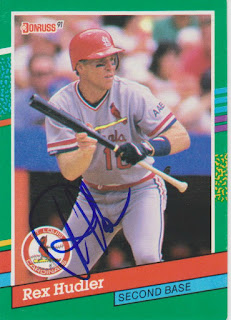 I just posted a card of Rex four days ago. In that post, I mentioned how good the signature was on that card and that it was the best I have gotten from him. This, on the other hand, is the complete opposite of that. This is one of Rex's hurried ballpark signatures that I got from him at a game in 2016. It is so different from the one that I got four months later that it is not even funny.

If I am not mistaken, this is the seventh card of Rex that I have posted on here and I still have two more to go. On top of that, I have one more card of Rex that I need to get signed, his '85 Donruss card. When I get that one signed, I will have a card signed by him with each team he played for- the Yankees, Expos, Cardinals, Angels, and Phillies. I even have a Japanese card signed by him. Hopefully I will be able to get the Yankees card signed at Fanfest, if I am able to go.

Even though the picture on this card was taken in 1990, it still seems like a pic from the '80s with the pullover jersey. It's too bad that it is not powder blue.
at 11:22 AM