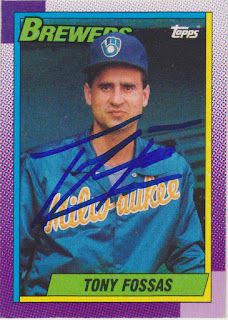 Here is the second of three cards that I got signed by Tony Fossas at Spring Training earlier this year. Tony was the Reds pitching coordinator and I got him to sign at the team's minor league workout. I posted the first card of him last month and that one can be seen here.

After making his big league debut with the Rangers in 1988, he joined the Brewers as a free agent prior to the 1989 season. He had a good season in Milwaukee that year and pitched in a career-high 61 innings. Over that span, he was 2-2 with a save and a 3.54 ERA. He struck out 42 batters, also a career high.

Things did not go as well the following season. Pitching in just 29.1 innings, Tony's record was 2-3 with a 6.44 ERA. It looks like the problem that year was that he wasn't missing many bats. He gave up 44 hits in those 29.1 innings compared to 57 hits the year before. The Brewers let him walk after the season and Tony was picked up by the Red Sox for the 1991 campaign.

Tony's transaction page is super-long. It is worth checking out. Over the course of his career, he was released or granted free agency fifteen times, four times before he even made his Major League debut.

I love the collared jacket in this card. This is probably one of the last times that fashion ever appeared on cardboard.

On an unrelated note, today is the day that Wichita is going to announce if they have lured an affiliated minor league team to the city. I really hope that they land one.
at 8:54 AM