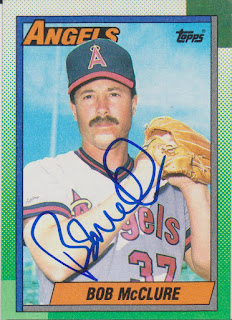 Here is the third and final card that I got signed by Bob McClure at a Giants game in 2015. Bob was the Phillies pitching coach at the time and he signed three for me by the Phil's bullpen. He was the only person that signed for me that day.

Bob spent parts of thee seasons with the Angels in the early '90s. Over that time, he appeared in 72 games and was 8-1 with 3 saves and a 3.11 ERA. He was having a rocky season with them in 1991 and got released mid-season. He was able to bounce back from it and still pitch in the Majors for two more years.

With this card, I now have cards signed by Bob as a Brewer, Expo, Met, Angel, and Cardinal. The only teams I am missing are the Royals and Marlins.

With the new manager in Philadelphia, some changes were made and Bob is no longer with the organization. He is now employed by the Twins as their special pitching adviser.
at 12:21 PM