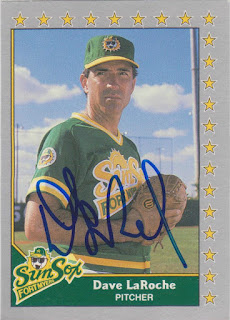 When I went to my first Stars game in 2016, I did not expect Dave to be there. I should have known better since Andy and Adam were both there, but I was not prepared. So, I came ready this year with the only two cards of him that I owned and one from the '74 set that I picked up beforehand. I was unable to get Dave prior to the game, but I stuck around and was able to get him afterwards. He signed all three for me.

At the games I went too both years, there was a fourth LaRoche there, Jeff. I am assuming that he is the eldest brother, but there is not a lot of info on him.
at 10:07 AM