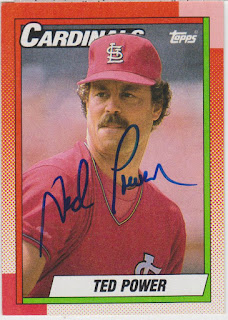 Here is the card that I got signed by Ted Power at a Reds Spring Training game earlier this year. Ted is the team's assistant pitching coach and he stopped to sign one card for me by the dugout.

Ted pitched in the Majors for thirteen seasons with eight different clubs- the Dodgers, Reds, Royals, Tigers, Cardinals, Pirates, Indians, and Mariners. Over that time, he racked up a record of 68-69 with 70 saves and a 4.00 ERA. Ted bounced around a bunch towards the end of his career, but he did spend about half of his career in Cincinnati. It was with the Reds when he had his best season in 1985. He was 8-6 that season with a 2.70 ERA and a career high 27 saves.

I did not know it at the time that Ted signed this card, but we share a couple of things in common. We both grew up in Kansas and Ted went to high school about twenty miles from my home town. Also, we both went to Kansas State. How I did not know that he went there is beyond me.

Here is my dilemma. I have kind of started a little Royals autograph project. I have been sending out TTM requests to random former Royals that I do not have autographs from. All of the cards that I send out feature the player with the Royals. So, I obviously have Ted's autograph. But, I do not have a Royals card signed by him. Ted seems to be a good TTM signer. Do I send out a Royals card of him to sign or just be happy with the one?
at 10:31 AM