In case you haven't noticed, I've been running a little contest here for the past two weeks that revolves around the College World Series. Twenty-five people have already entered and have a tiny head start. But, it is not too late to get in on the action. There are plenty more points to be earned and no one is even close to locking this thing up yet. So here is all you have to do- fill out a College World Series bracket. 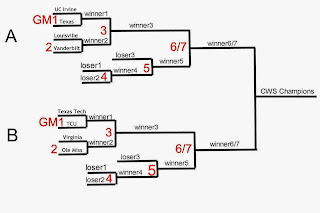 For instance, group A has UC Irvine and Texas squaring off in game 1 and Vanderbilt and Louisville going in game 2. Pick who is going to win each of those games and then those two teams will square off in game 3. The losers of games 1 and 2 will then square off in game 4. Then, the loser in game 3 plays the winner of game 4 in game 5.

At that point, there will be one team left in the group that is 2-0 (winner of game 3) and one that is 2-1 (winner of game 5). Those two teams play in game 6, which is an elimination game. If the 2-0 team loses, they play a game 7 and the winner advances to the championship. If the 2-0 team wins game 6, they go straight to the championship without game 7. BUT, for the sake of this bracket, I am going to count it as one game. Just pick who you think is going to advance. It doesn't matter how they do it. I am going to call it game 6/7.

If you guess every game right, including how many games will be played in the finals, you can come out with 22 points. As for the prizes, I haven't figured that out yet. It will probably mostly consist of stuff brought home from Omaha.

The CWS begins at 3:00 PM, eastern, on Saturday, June 14. So, all entries must be in by that point. If you have any questions at all, feel free to email me at zman40 at hotmail dot com. Or, just ask in the comments.

If you think I might have made an error in the scoring, just let me know. I will be happy to look into it.

Vanderbilt over UVA in 3 games, total runs of 27.

I have to go for the Dores.

I should have used a piece of paper as advised, mmm..

I hope UVA loses both games by 4 billion runs.

I have 2 points! I have no idea how I got them!

Louisville over Texas Tech in 3 games, total runs of 16.

Vanderbilt over Virginia in 2 games, 23 runs

Sorry, change A5 to Vandy on mine. Thanks.