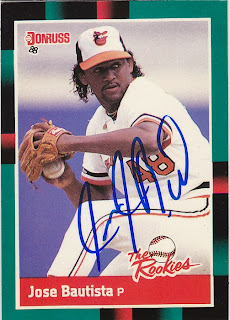 Nope, not that Jose Bautista. This is the first one, that one that pitched for the Orioles, Cubs, Giants, Tigers, and Cardinals in the '80s and '90s.

This Jose is the pitching coach for the Kanapolis Intimidators of the South Atlantic League. The Intimidators are affiliated with the White Sox and I was able to get two cards signed by him at the White Sox minor league workout at Spring Training last year. Jose was off to the side helping with pitchers bullpen sessions and was easily accessible.

Jose spent parts of nine seasons pitching in the Majors, working mostly as a middle reliever. He was a starter in his first season and ended up finishing 6-15 with the '88 O's club. He started two-thirds of his games the next season before going to the 'pen except for some spot starts with the Cubs and Giants.

Jose's Baseball Almanac page seems to have him slightly confused the current Jose Bautista. When you click on "Awards", it lists him as the two-time player of the week award winner in 2010.
at 8:46 PM

I didn't like 88 Donruss particularly but the Rookies and those orange (Baseballs Best?) sets were pretty awesome.

Nice autograph Zach, I always like seeing former Orioles on your blog! Do you know if Jose is going to be back with the Intimidators this season?

I'm pretty sure he is going to be back with Kanapolis.