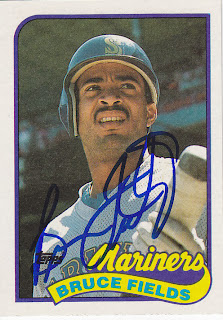 Here is a card that I got signed about a year and a half ago at a Royals game. Bruce was the Indians hitting coach at the time and he was nice enough to sign two cards for me while his club was taking batting practice.

Bruce's Major League playing career lasted just 58 games, over parts of three seasons, with the Tigers and Mariners. In that short span, Bruce hit .274 with a home run and 11 RBI. His lone home run was off of John Davis of the White Sox.

I really only remember Bruce because he was a Rated Rookie in the '87 Donruss set. I wanted to get that card signed by him, but the card is an uncorrected error as it mistakenly has a picture of another player (Darnell Coles, maybe?) on it. Some guys are real iffy about signing a card without their picture on it, so I passed. Luckily, I was still able to find two cards of him to take with me that day.
at 7:48 PM