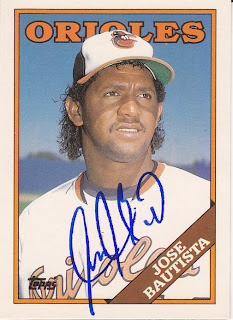 Here is the second and final card that was signed by Jose Bautista during Spring Training last year. Jose is a minor league pitching coach in the White Sox organization and I was able to get the cards signed during a minor league workout.

Speaking of Spring Training, pitchers and catchers reported yesterday. We had an awesome time in Arizona last spring and we had the itch to go back again this year. But, we decided against it since we have a wedding to pay for and we would like to go to Chicago this summer for the 100th anniversary of Wrigley Field. But, now that Spring Training has officially started, that itch is back and it is getting harder to scratch. Ultimately, I think we are going to say no, but you never know with us.

Anyways, now back to this card. I was a little surprised how the signature came out on this one. This is just a regular old Topps Traded card, but the signature looked like it wanted to start to bubble up like it was on a Tiffany card or something. I have no idea how to explain this one. This card came out of the same set as the Don August card I posted yesterday, yet the August card came out just fine.

While I am probably not going to Spring Training this year, I am going to my first baseball game of 2014 tomorrow. Wichita State is hosting Southern Illinois-Edwardsville and former Major Leaguer Jason Isringhausen happens to be the pitching coach for SIE. Hopefully I will have better luck with collegiate pitching coaches this year than I did last year.
at 6:16 PM

You don't do anything to treat those older cards do you? Not like a glossy newer card.