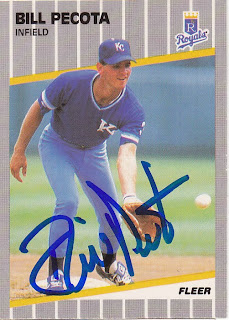 This is the first time I have ever got in-person signatures from the same person twenty-five years apart. It is kind of cool because you can see how his signature has changed slightly over the years. While not drastically different, there is noticeable changes. The main ones are the fist and last letters that he signs, the "B" and "t". In 1988, his "B" actually looked like a B while his "t" looked more like a star. Now, I don't even know how to describe his "B". And his "t" is completely different. He used to start it from the bottom, but now he picks up his pen and starts it from the top. It now looks more like a plus sign than a star.

I have about four more cards of Bill to post, so I am just going to leave this one as just an analyses of how his signature has changed over time. Below is the first card I posted of him so you can see the changes for yourself.

Has anyone else noticed any changes in a person's signature over time (not counting when they get really old)? 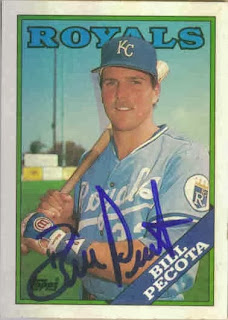 I've definitely seen some changes over time in a few Orioles in-person signatures. And I'm with you that they normally get worse over time. But I wrote a post at one point about how Zach Britton's autograph drastically improved one offseason too, so at least it can go both ways!