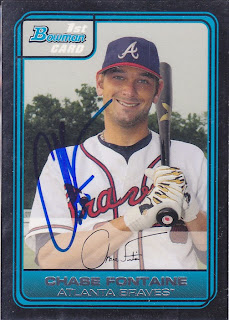 Here is a card that I got signed in 2009 in Wilmington, Delaware. I was out that way visiting an old Army buddy and the Wilmington Blue Rocks happened to be hosting the Carolina League finals the weekend I arrived. Even though it rained a lot that weekend, we still ventured up to a game and did okay getting autographs.

Chase was one of the final players that signed for me before the game and I probably would have been shut out by him if it wasn't for my buddy. When Chase was walking back to the dugout after warming up, I called out his name twice and I was ignored both times. My friend didn't think that was right and he yelled out "HEY CHASE" loud enough to be heard on the opposite side of the field. That finally got Chase's attention and he then came over and signed for me.

Looking at the pre-printed signature on the card, it appears that Chase had a neat looking autograph at one time. Unfortunately, he has shortened it a great deal and all that can really be made out now are his initials.
at 5:35 PM