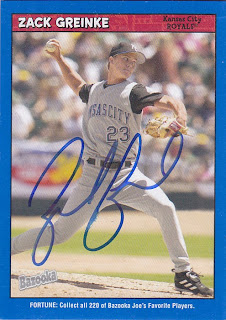 I got this card signed by the Royals parking lot in April of 2009. That was the day I went to Kansas City to 'graph the parking lot and the game, but the weather was colder than I anticipated. Being under-dressed for a chilly night game did not sound like fun, so I called it quits after 'graphing the parking lot. But, I got over twenty cards signed, so it was a good trip.

When Zack signed this card for me, he was in the midst of his 38 inning scoreless inning streak. But, he was still nice enough to sign a couple of cards for me. It was misting at the time, so the "G" is a little smudged from a small drop of rain.

Zack is not the most personable guy in baseball. But for whatever reason, once the Sports Illustrated with him on the cover came out in 2009, he was signing for everybody after games. That is unusual behavior for a guy that suffers from social anxiety disorder. He didn't talk much or smile while he was doing it. But that fact that he was doing it said a lot about him.
at 6:30 PM