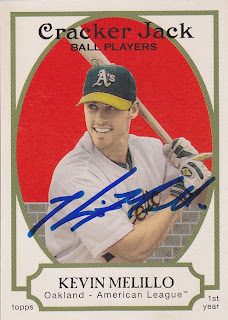 Here is the second card that Kevin Melillo signed for my buddy in Colorado Springs over the summer while he was with the Salt Lake Bees. If you are unfamiliar with Kevin, he is one of the elites of the game as he has a 1.000 career on-base percentage. He is the second player that I have gotten an autograph from who has a 1.000 OBP (Adam Greenberg is the other).

This is the first card from the 2005 Cracker Jack set that I have got signed. I was deployed in '05 and the only cards I saw that year were the Donruss, Topps, and Topps Total packs that my dad sent me in care packages. I really liked the '04 Cracker Jacks cards and I must say that I was extremely disappointed when I first saw the '05 cards. I'm sure the cards mirror an original Cracker Jack set, but I cannot get over what looks like a cinder block wall in the background. I'm too lazy to look up what one of the original cards looks like, but I really hope that there is not a cinder block wall in the background. Get rid of the wall and this set may be better than the '04 set.

This is the last card from my between years recap and I will dig into my 2006 autographs on my next post. I've got about sixty cards from that year and at the pace I am on, it will take me about four months to get them all posted. Since the Royals decided to cancel Fanfest (BOOOOOOO) this year so that they can focus on the All Star Game, it might be a quick transition from 2006 to 2007. About the only cards that I will have to post between the two years will be my Topps Diamond Giveaway cards that I get signed through the mail. I've got about half of those cards sent out already and three of them are back home. If I can keep it up, it should be a mildly entertaining off-season despite the one year loss of Fanfest.
at 8:40 PM

Cracker Jacks look nice with the autos on there, even if the auto is impossible to read.