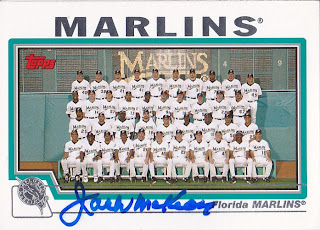 For some reason, I never had any desire to send Jack McKeon any cards to get signed. But when Jack was brought back to manage the Marlins this season, I couldn't resist sending him some cards. I have no idea why I suddenly had the urge when he got back with a Major League team, but I did. Nevermind that he was already a good signer from his home address before he was brought back. But, I sent him three cards in August and all three came back signed three weeks later. And, to further illustrate my sudden quest to get Jack's signature, it was the only TTM request I did all summer.

I picked this card to send to him since it was the only Marlin card that I could find that seemed suitable to send out. I'm not positive, but I think that Jack is sitting front and center in the first row. I usually never do anything with team cards like this, so it was nice to be able to put one to use.
at 5:42 PM

I've got a Jack or two in my collection too. I like this one. The teal stripe looks good on the team card.

I never really thought to do that with a team card.

This came out looking nice.