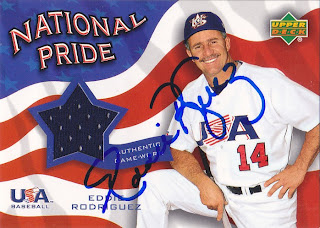 Here is a card that I got signed prior to the Royals last home game of the season. That day, I took advantage of the "Early Bird Special" stadium tour and I got to go in and watch the Royals take batting practice an hour before the gates opened. It worked out really great as I was finally able to land a few Royals signatures that I had not had yet.

One of those new additions was Eddie Rodriguez, who has been with the Royals since 2009. I've had plenty of opportunities to have Eddie sign for me, but there has been one problem. It is extremely had to find cards of him. Eddie never played in the Majors and his minor league playing days took place in the late '70s and early '80s when minor league cards were less prevalent. He managed in the minors and coached in the Majors, but there were not any major issue cards made of him. He has a few minor league cards from team sets, but I have never seen any of them show up on checkoutmycards.com. I'm sure that I could find some on Minor League Singles, but I am lazy and comc.com is so much easier.

Eventually, though, this card appeared on comc.com for less than two dollars and I was more than happy to pick it up. I like getting jersey cards signed and this one came out looking good.

When I originally got this card, I just assumed it was from the same set that my Luke Hochevar jersey card was from. Turns out that I was off on that assumption. But, to my defense, if you check out the card of Luke, you will be able to see why I thought that.
at 7:28 PM