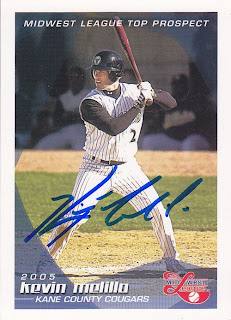 If you have never heard of Kevin Melillo before, don't feel bad. I hadn't either. But, after checking out his career stats, I found that Kevin has an interesting stat line. For his career, Kevin has a 1.000 on-base percentage.

On June 24, 2007, the A's were in New York during an interleague series against the Mets. The Mets were cruising along with an 8-2 lead when the A's came to bat in the eighth. With the pitcher's spot due up to lead off the inning, A's manager Bob Geren inserted Kevin Melillo into the lineup as a pinch hitter. Kevin worked the count full against Guillermo Mota before taking ball four. Kevin ended up stranded at first and he was replaced by a pitcher in the bottom half of the inning. To date, this is the only Major League action that Kevin has experienced.

My buddy, Adam, got this card signed for me when we were in Colorado Springs this summer. Kevin was playing for the Salt Lake Bees at the time and he signed this card before the game started.

I bought this card from checkoutmycards.com, so it is the only card from the set that I own. But, I wonder if all the cards in the set have the same strange shaded area along the border of the card. I thought at first that the shaded area might have been set to kind of outline Kevin's batting stance. But it goes too far out in front of him and then both of his feet are in shaded areas, so I doubt that is the case. If only I had another card from the set to compare it to.

Kevin is playing for the Kane County Cougars in this card. The Cougars are still around, but they are now affiliated with the Kansas City Royals.
at 10:48 AM

I was probably watching that game, but I have no recollection of Melillo. I think I do have an autographed baseball card that I picked up somewhere along the way in a trade.