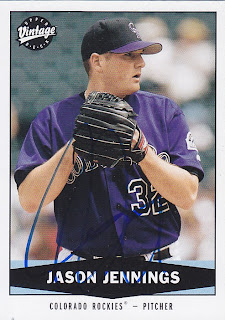 Here is a card that I got signed at a Wichita Wingnut playoff game a few months ago. That's right. The 2002 National League Rookie of the Year was pitching in the American Association this season. He was the ace of the Grand Prairie AirHogs staff and, although I got to see the Hogs play twice, I wasn't lucky enough to see him pitch. I did get some cards signed by him both times, though.

I got three cards signed by Jason in July when I made the trip down to Amarillo. But when the Wingnuts made the playoffs and I decided to go to a game, I couldn't find the stack of Jason Jennings cards I had in July. So, on short notice, this was the only card that I could find of him and I am not that thrilled with the results. I never realized it before I got this card signed, but purple jerseys and signatures do not work well together. I was debating whether to get this one signed in blue or black and I doubt that black would have came out looking any better. But that is okay. The next Jennings card I will post looks much better.

I hope everyone is having a great Veteran's Day!!
at 3:44 PM