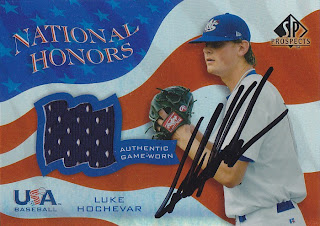 This year, Luke gets the nod as the Royals Opening Day starter. I have mixed feelings about that, but after the loss of Grienke and Meche, Luke kind of became the ace of the staff by default. The main problem I have with Hochevar is that he has a hard time staying healthy. In three seasons with the Royals, he has yet to throw over 150 innings. Last season, he only threw 103 innings. Maybe all of that will change this season and he will be able to last 180 innings or more. I can only hope that that is the case.

The other problem I have with Luke is his consistency. There are some days when he looks like he really knows what he is doing and then other days where he just looks confused and beaten on the mound. I would prefer him to be in control every game he pitches, but just being more consistent in his starts would be good enough for me.

On an unrelated note, I will say that Luke has been a good signer thus far into his career. I have got him to sign inside the ballpark and outside by the parking lot. He even signed outside the ballpark one day for about ten minutes when he had his Saint Bernard with him.

I didn't realize that the flat bill trend was going on in 2004. I don't recall seeing flat bills until Chad Cordero was sporting one in the 2005 season. Nevertheless, Luke still wears the flat bill. Maybe it was he that started the trend.

Not only is this the first game-used card that I have posted on here, this is also the fisrt Team USA card as well.
at 11:32 AM

That card looks great. I have yet to get a game used card signed. Nice work!

Somebody used to iron their bills. I'm thinking it was Dontrelle Willis.

Good point about D-Train, Justin. I think he had a flat bill in the '04 World Series.

Very cool card, I've never thought about trying to get a game-used card signed, but it looks great.