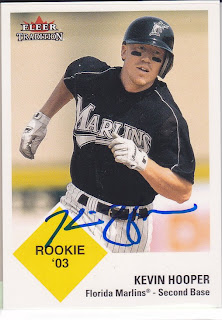 Here is a card that I bought off of checkoutmycards.com recently and got signed this past Tuesday at the American Association All Star game in Wichita, Kansas. The managers and coaches for the game are the staffs from the two teams that played in the championship the previous year. The Wingnuts didn't play in the championship, but since they were the host team, I figured Kevin would be at the game and I was right.

Kevin was coaching the bases for most of the game. Prior to the game, he was the North's pitcher during the home run derby. He and the three Sioux Falls Pheasants that he was pitching to got off to a slow start and each batter only had one home run in the first round (five outs). But, after three rounds and three tie-breakers, Sioux Falls' Beau Torbert ending up winning the derby. So, I guess that makes Kevin Hooper the winning pitcher, as well. I got Kevin to sign this card for me shortly afterwards.

This card is a little different than the last three Fleer Tradition cards I have posted. For some reason, this card is glossy and numbered 10/100. I am assuming that these cards were just random inserts into packs, but I do not know for sure. Either way, after some prepping with baby powder, the signature came out just as good as the previous three.

So far, this is the second Kevin Hooper card that I have posted on here. You can see the first one here.
at 12:25 PM