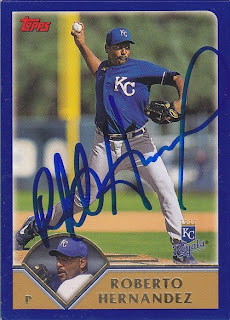 Last December, I got a random package in the mail from Arizona. It came from Uncle Moe, of My 2008 Topps Set Blog. In it were three random Royals autographs that he had sent me as a thank you for helping him out with a few cards for his blog. The best part about it was that the three cards were of three known Royals players (at least to Royals fans) that I did not have any signed cards from. How Moe could just randomly pull out three signed Royals cards from his collection of players I needed signed cards from is beyond me, but he obviously did a great job.

Ramon represents an interesting era of Royals baseball. In 2000, the Royals had the best offensive season in the history of the franchise. It was a fun team to watch and it would have been a legitimate contender if they had decent pitching. But they didn't. Instead, they had a merry-go-round bullpen that ended with the closer, Ricky Bottalico. Rickey finished the season 9-6 with 16 saves. How many teams have closers that have almost as many decisions as saves?

Luckily, the Royals GM, Allard Baird, came up with a solution during the offseason. He decided that the Royals needed a legitimate Major League closer and that was all that was standing between them and the playoffs. So, in a three team deal, he traded Johnny Damon for Roberto Hernandez, Angel Berroa, and A.J. Hinch. That was the beginning of the end of the great Royals offense and, except for a fluke 2003 season, the end of competitive Royals baseball.

But, Roberto did a decent job as Kansas City's closer. In his two seasons in that role, he recorded 54 saves. But with the loss of Damon and then Jermaine Dye at the 2001 trade deadline, the Royals offense had lost a lot of its punch and Roberto didn't get as many save situations as Baird thought he was going to get when he acquired him.

After the 2002 season, the Royals granted Roberto his free agency. He went on to pitch five more seasons in the Majors, but not as a closer. The former two-time All Star only recorded six saves after his Royals tenure. But, for his career, he amassed 326 saves, which ranks him at number twelve on the all-time list.

I believe Moe got this card signed during Spring Training. Thanks Moe!
at 12:37 PM