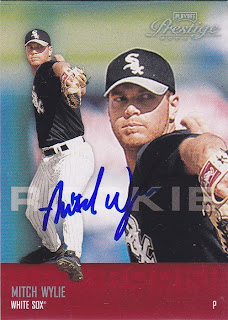 Here is the third and final Mitch Wylie card that I got signed at the lone Wichita Wingnuts game I attended last season. You can see the first post here and the second one here.

Mitch was an eighth round draft pick by the White Sox in the 1998 draft. He moved steadily up the ranks for the Sox until he reached AAA in 2002. He only pitched in six games that season before missing the rest of 2002 and all of 2003. He came back in 2004 at AAA and posted a 5.74 ERA in 28 games (all but one was in relief). But, it must not have been good enough for the Sox and Mitch split the next season between the Giants AAA team and Sioux City of the Northern League. He then pitched the 2006 season with the Norfolk Tides before sitting out the 2007 season. He came back in 2008 with the St. Paul Saints before hurting his arm again. He stayed on with the Saints as their pitching coach for the rest of the season before rejoining the starting rotation in 2009. Like I said in the last post, I have no idea what he is up to these days.

Speaking of Wingnuts games, I have been to four this year (counting the American Association All Star game) while I have only been to three Royals games. At my current job last summer, I had weekends off. But, they moved me up and I can only take one weekend a month off, which has greatly reduced my out of town road trips this summer. I get jealous when I read the posts on Paul's Random Stuff and I see that he has already attended more than thirty games. But, I guess I'm fortunate to have gone to as many as I have with my wacked-out work schedule. So far this summer, I have been to 15 games- 3 college (2 KSU, 1CWS), 3 Royals, 4 American Association games, 1 Northern League game, and 4 AA-level games. I guess I have gravitated more to the Wingnuts since I can head down there after work and still get my autograph fix in. While it is still fun and all, it just doesn't compare to getting 'graphs at Kauffman Stadium.

I bought this card from checkoutmycards.com just because it was a Playoff card and I did not have any Playoff cards signed. I just recently realized what an ugly card it is. I just don't see the point in having two versions of the same photo on the same card. What purpose does that serve?
at 5:27 PM

Where is it? Seriously, my father-in-law taught him math in HS, so I'd love to see the post!

Sorry CCC. For some reason, I hit enter after typing the title and it got posted a little premature.