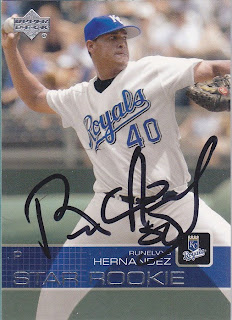 I ask a ton of players for autographs and I get rejected more often than not. It's just a part of the game and I usually just leave it at that. But that was not the case on the night I got an autograph from Runelvys Hernandez. On that night, I practically had to beg.

Runelvys was the starting pitcher for the Round Rock Express at the lone Express game I attended in 2008. I asked him to sign for me before he took the field and he told me that he had to get ready (he was the starting pitcher that night), but he would sign for me after the game. Well, Elvis didn't stick around for the whole game. He decided to head to the clubhouse during the ejection marathon that ensued in the seventh inning. Luckily, I saw him making his way to the clubhouse in left field and I intercepted him on the concourse and asked for his autograph again.

So, it took a bit of begging with a little bit of flattery to get this card signed.

Amazingly, this signature looks the best out of the three.
at 12:42 PM

I've always enjoyed Runelvys's name. But it's a shame he put you through that for his autograph.

Nice work getting your cards signed though.

I told my wife this story at tonight's ORoyals game. We both agreed that Runelvys was pretty ridiculous in how he handled it.