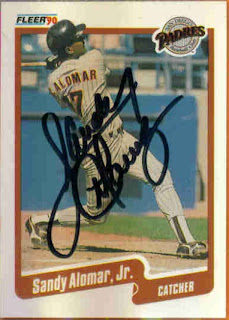 I doubt that this Padrograph needs much of an introduction. He is probably, in my opinion, the most famous Padrograph that I have posted on here so far. Interestingly, Sandy only played in eight games with the Padres. Yet, it seems that there was a bunch of cards made of him as a Padre. By my count, he had seven regular issue Padre cards in 1989, including a Topps Future Star card and a Donruss Rated Rookie. The next season he had five more Padre cards, including a Donruss Rated Rookie card. I wonder how many players got more than one Rated Rookie card. After the 1989 season, he was packaged with two other players and sent to Cleveland for Joe Carter. He spent the next eleven seasons with the Tribe, making six All-Star teams and appearing in two World Series. He then spent the next seven seasons on a vagabond journey with five different clubs while doing three stints with the White Sox. His nineteenth and final season was in 2007. He spent most of the season in New Orleans, the AAA affiliate of the Mets, but did get into eight games with the Mets that season.

Sandy has a great autograph. Not quite as neat as his old man's, but still very sharp.

I remember Sandy being injured most of the time. It's amazing that he made six All-Star teams in eleven years. So he was an All-Star more often than not.

By contrast, Chipper Jones has the same number of All-Star bids as Sandy. And Chipper is going into the Hall of Fame someday!

This is one of the things I hate about the All-Star game selection process. It's a popularity contest and has little to do with actual stats.

Yeah that's an awesome analysis. I saw that year in 1997 and was pretty impressed as well. Maybe he broke down in '91 and '92 after the All Star break but either way those weren't spectacular numbers. Like you said, mostly a popularity contest. But the thing is, I don't trust the managers or sportswriters either. Ever since Rafael Palmeiro won a gold glove playing just 28 games in the field...heh.

At least Joakim Soria was a legitimate All-Star for the Royals last year! None of this Eric Milton stuff, or whoever they've had represent them recently, if it wasn't him.