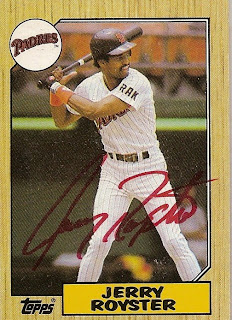 Today's Padrograph features Jerry Royster. Jerry had a long career and spent most of his time with the Braves. He was a light-hitting infielder who has a .249 career average. He went into coaching after his playing days and was even the Brewers manager in 2002 after they fired Davey Lopes. These days he is the manager of the Lotte Giants of the Korean Baseball Organization.

Here is another card that Rod got signed in red. Again, it looks good. I don't know how Rod got this autograph, but I'm going to take a guess. I bet he got it at a Beavers game when Jerry was the manager of the 51s. Am I right, Rod?
at 6:28 PM

Dammit, thought that I had it.