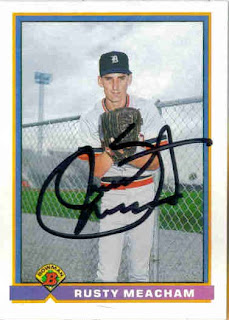 Here's the first card of 1991. I got this card signed at a Staten Island Yankees game this past summer. Rusty was the pitching coach of the Vermont Lake Monsters of the New York-Penn League. He seemed pretty nice and signed for everybody. He signed all three cards for me.

The stands in this picture almost look like a high school football stadium. It's obviuosly from Spring Training, so it is probably the end of the seating area by third base.

I almost forgot. I got an autograph in the mail today from Paul's Random Stuff. It is a card that I won in a contest early next week. The card is from 1998, so it's going to be a little while before I show it on here. But, thank you Paul. If you haven't been to his site, check it out. He's a big Mets fan and has lots of cool autographs on his blog.
at 10:36 PM