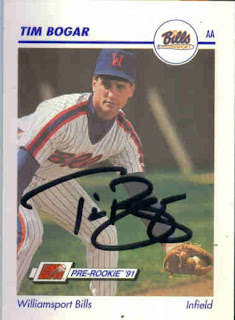 This is the second of three cards that I got signed in Kansas City last summer. At the time, Tim was the quality assurance coach for Tampa Bay. Next season, he takes over as first base coach for the Red Sox.

The last card that I showed of Tim had him in AAA. This card came out the next season and it has him back in AA. Speaking of AA, this card is of the Williamsport Bills. Williamsport now has a short season A team, the Williamsport Crosscutters. Of the four AA cards that I have shown from this set, two cities dropped down to A ball, one dropped down to independent ball and one moved up to AAA. I guess that goes to show how the economics of minor league baseball work.

These cards were made by Impel. They came in two sets, one of AA cards and one of AAA cards. After this, it's back to Major League cards until I get to 1992 Classic/Best.

Also, I think that I'm going to start off the new year with a contest. I have never done a contest on here, so I'm looking forward to it. So keep checking back during the next few days if you might be interested.
at 11:54 PM

How big were the Impel sets? Did they feature entire rosters or was it mostly AAAA guys and prospects? Sounds like an interesting set.

They were pretty big sets. They were two different sets (AA and AAA) and both sets had over 600 cards, I think. So, yeah, it was entire rosters and even some coaches. I have a lot more of the AA than the AAA cards.
I just found a box of the AA cards on ebay for $8.

These sets were sold in drug stores, etc., right with all of the other Topps/Fleer/Donruss/UD cards of the day. I remember it was the first time I ever saw that with minor league cards. And I thought it was so cool.

Nice. I got the same card signed back during Tim's playing days, and his autograph hasn't changed that much over the years.

I miss those Line Drive sets. Sure they were filled with a bunch of players that no one knew, but it was fun to see all the different minor league logos and uniforms.

That's something I miss with most of the prospect cards on the market today. They either show the players in major league uniforms from spring training photos, or they have to hide the logos because they don't have a license.

Good sig.
I was hoping Bogar would come back to the Mets after his time in TB.

I, too, miss cards like these. The photoshopped Bowman cards don't do it for me. The thing about these is that I appreciate them more now then when I actually collected them. Sure there are a bunch of nobodies, but so what. It's not like Topps could put a 660 card set together without repeating a few players. The Impel Line Drive sets did not repeat one person, as far as I know.

Nice auto Paul. It looks like Tim has added some swiggles or something to his last name. Other than that, they are identical.