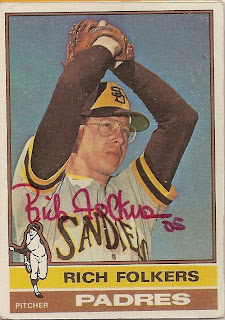 This is the final Padrograph from the 1970s. Tomorrow, Padrographs II will be jumping to 1984.

Here is another former Padre that I had never heard of. Rich was mostly a relief pitcher in the seven seasons he spent in the big leagues. He pitched for four different teams, but had his best season with the Cardinals in 1974. That year he pitched ninety innings with a 3.00 ERA. With those glasses and being left-handed, he reminds me of Paul Splittorff.

Rod likes to get signatures in ink besides the standard black and blue. Here is the first red one. I think that it looks really good on this card. Also, it looks like Rich put his number under his name. It looks like 05. According to Baseball Almanac, Rich wore the following numbers- 30, 28, 26, 45. Maybe the card was signed in '05 or it is actually 26 or 28? I don't know.

I have very few 1976 Topps cards, but I find it very unusual that the three I show on here are all pitchers that have close-ups of fake windups. You can see the original one here.
at 5:05 PM

Great, great card, and great sign. I love how the player had the sense not to sign on top of his face or right over his jersey's logo. The sig. is kind of tucked right there under his chin.