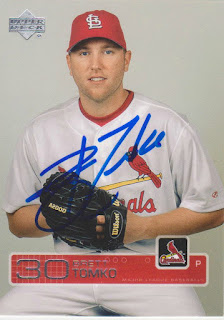 Here is a card that I got signed at the NBC World Series two years ago when the Kansas Stars made their first appearance there. The Stars were a roster of former Major League players competing in a tournament against college kids. Even though Wichita hosts the tournament every year, I never bothered to go until the Stars came around.

When I went to the Stars first game, I got there really early to try to get players as they showed up to the ballpark. That was a bust as all the guys came on a bus and the bus didn't stop outside of the park; it backed up into the gates. So, I went inside and it was a madhouse in there. There was a game going on at the time, so I made my way to the outfield to see if I could get some players by the clubhouse and batting cages. To my amazement, I was the only person out there and I quickly nabbed Brad Penny and Roy Oswalt after they concluded interviews with the local news outlet.

Shortly thereafter, another guy joined me out there. And then one more. We tore it up for about a half hour until a crowd gathered out there with us. Then the fun police came out and shut us down. They threw up a PVC fence to keep everyone away from that area. So, I went back to the third base line to join the madhouse and I only got two guys to sign for me there. That was nothing compared to the forty cards I got signed by the clubhouse.

This year's NBC World Series started up this past weekend and, sadly, the Stars are not a part of it. That is too bad since 'graphing the Stars games the last two years had definitely been my 'graphing highlight each season.
at 10:43 AM