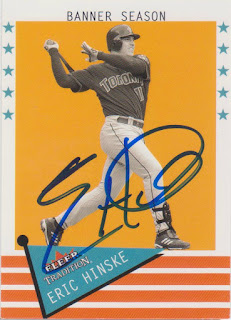 I have only been to two Royals games this summer and the 'graphing has not gone well. The first game I went to was against the Yankees and I got shutout on autographs. The last game I went to was against the Angels. It was a three o'clock start time, so I got there early to try to get some of the players when they arrived at the ballpark. It was a complete waste of time since Hansel Robles was the only Angel to sign and I did not have a card of him. All of the players and coaches that came off the bus completely ignored everybody.

The one exception to that was Eric Hinske. He arrived early in a cab and was nice enough to sign for whoever wanted him to. He was pretty funny because he signed a ball for a kid who then asked him who he was and he started giving the kid crap for not knowing who he was asking an autograph from. The funny part was that the kid's mom didn't think Eric was funny and she started defending her little boy. Eric had a big smile on his face and told her "I'm just giving you a hard time; but seriously, you should know who you are asking to get an autograph from". The mom really didn't like that, but I thought it was funny and completely true.

Eric had a huge rookie season with the Jays in 2002. That year, he wound up hitting .279 with 24 home runs and 84 RBI. Those numbers were good enough to land him the American League Rookie of the Year Award. Unfortunately, even though he would go on to play eleven more years, he was never able to match the numbers he put up in his rookie season. He would, however, play in three straight World Series from 2007-2009 with three different clubs. He brought home a ring in two of the three.

Eric is currently the hitting coach for the Angels.

While overall I think you're right about knowing who is signing for you, I can remember as a kid (8 or 9) getting signatures at MiLB games and just being thrilled to be so close to a pro ballplayer and getting an autograph, regardless of who it was. Still though, if you don't know who it is, at least pretend lol.

I know what you mean. Ask the other people that got they guy's autograph, not the guy himself.