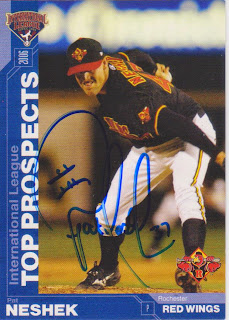 Back in January, I sent Pat Neshek his 2014 Topps All Star card and three other extra signed cards that I had laying around. Pat signed the card for me and sent me three minor league cards of himself that he had signed. This is one of those cards.

Since I am so far behind on posting cards, it is fun to actually post a card of a current player and to see what he is up to right now. Currently, Pat has no record in five outings with the Astros. He has given up 2 runs in 5 innings of work, good for a 3.60 ERA. That ERA is a little high for him, but it is still early.

This is the second card of Pat that I have posted. The first one can be seen here.
at 8:25 PM