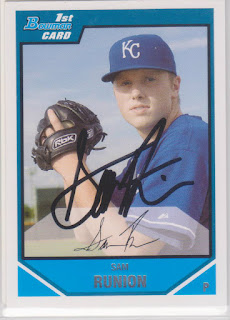 Here is a card that I got signed by Sam Runion while he was a farmhand for the Royals. I got the card signed in 2009 while he was with the Burlington Bees. My dad and I were on our way to St. Louis to see the Futures Game and we stopped in Burlington on the way to break up the trip and to take in another ballpark. I got a decent amount of cards signed at the game, mostly on my Bees team set I bought that day. I did take this card and one other of Sam to get signed, but I failed to make that happen before the game as I never saw him. Luckily, once the game started, someone pointed him out to me in the stands charting pitches and I was able to get the cards signed then.

The college baseball tournament is underway. While there have been a few upsets so far, none of the top seeds have been eliminated yet. But, there is still plenty of ball to be played over the next couple of days, so anything can happen.
at 8:11 PM