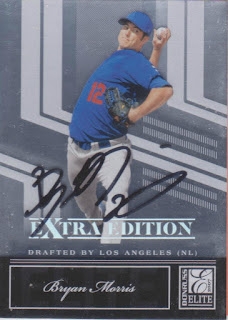 Here is a card that I got signed at a Wilmington Blue Rocks playoff game in 2009. Bryan was playing for the visiting Lynchburg Hillcats at the time and he signed this card,and one other, for me before the game started.

Bryan has been playing in the Major Leagues since 2012. I, however, had no idea until I pulled a card of him out of 2013 Topps Heritage. It didn't help matters that I pulled that card in the middle of 2014..

Bryan made his Major League debut with the Pirates in September of 2012 in a game against the Cubs. He entered the game in the ninth inning with the Bucs down 7-4. He faced three batters (Luis Valbuena, Anthony Rizzo, and Alfonso Soriano) and retired them in order. He pitched in four more games that month and only gave up one earned run.

He spent most of 2013 in the Pirates bullpen and he had a very solid season. He was 5-7 with a 3.46 ERA in 65 innings. He made the postseason roster and pitched in one NLDS against the Cardinals and pitched a scoreless inning.

Last season, he was putting up similar numbers when the Pirates traded him to the Marlins in June. He had a stellar finish in Miami, going 4-1 with a 0.66 ERA over 41 innings.