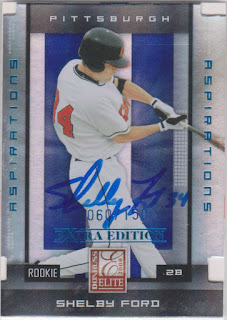 How is that for a name? It is certainly better than being named Taurus, Escort, or Focus. Ranger might have been cool, though.

I got this card signed by Shelby in 2017 at a Wingnuts game. He was the hitting coach for the Grand Prairie Airhogs at the time. The 'Hogs had a rough season that year and got a little short on players. Because of that, they had to activate Shelby. He played in just two games for them and went 1-4 with his lone hit being a single.

He would go on to play parts of five seasons in the independent ranks before calling it a career after the 2015 season and then again after 2017. He finished his affiliated minor league career a .253 hitter with 30 home runs and 203 RBI.