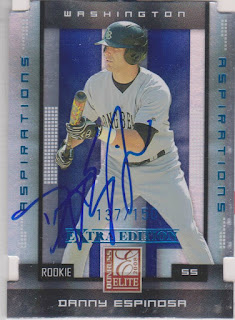 Next up from the 2008 Donruss Elite set is this die-cut card of Danny Espinosa. This card is limited to 150 copies and I was able to get it signed at the Futures Game in St. Louis in 2009. Danny signed this card and one other for me.

Danny has played eight seasons in the Majors, with all but one of them with the Nationals. He also saw time with the Angels, Mariners, and Rays during the 2017 season. Last year was spent with three different organizations at the AAA level. Right now, he is in camp with the Mets as a non-roster invitee. It will be interesting to see if he can find his way back to the majors this season. Considering that he his hitting just .067 in 30 Grapefruit League at-bats, that may be a long shot.

During his time in DC, Danny was a .226 hitter with 92 home runs and 285 RBI. In 2016, he set single-season marks for himself by hitting 24 homers and driving in 72 runs. On the flip side, he hit just .209 with 174 strikeouts and just 15 doubles. The Nats traded him to the Angels after the season and, since then, he has signed with seven different teams.

If Danny is unable to find his way back to the Majors, he will have finished his career a .221 hitter with 98 home runs and 316 RBI.