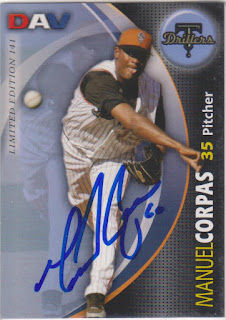 Normally, when I get to a minor league team set, I will just post all the cards that I have signed from that set in a single post. But, I only have two cards signed from this set and this set is a little different. So, each card will get its own post.

This set was a stadium giveaway. Rather than giving away a set of the current players on the Drillers, this one features the best Drillers players from their time as a Rockies affiliate. The Rockies began their affiliation with the Drillers in 2003, so it is impressive that they were able to put out a "best of" set after just four years.

The first card from the set that I got signed was this card of Manny Corpas. I got this one signed by the visiting team dugout at a Royals game in 2010 when the Rockies came to town. I ran across Manny outside the park on his way in, but he wouldn't sign then. His reason was that he had signed the day before. Luckily, he changed his mind once he got inside. Manny signed three cards for me.

I was a little skeptical about how cards from this set were going to turn out signed with the odd background and all. But, to my amazement, they both came out looking good.
at 2:41 AM