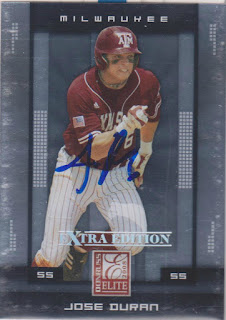 Jose Duran was drafted in the sixth round of the 2008 draft by the Brewers. He signed quickly and made his minor league debut that year, hitting .221 for their rookie level team. He played A ball the next season and again hit .221. The Brewers had seen enough and released Jose. His career in affiliated ball was over.

But, he latched on in the American Association and was able to play three more seasons on that circuit. He made the rounds in the Am-Ass, setting up shop for five different clubs in those three seasons. He saw time with Grand Prairie, Ft. Worth, Wichita, Kansas City, and Winnipeg. Over the course of it all, he hit .290 in the league before calling it a career after the 2012 season. He did come back in 2014 in the United Baseball League, but played in just 26 games before calling it quits for good.

For someone that only played two seasons of affiliated ball, Jose sure got quite a few cards. He has one Bowman card and the rest are from Panini.

I got this card signed at a Wingnuts game in 2012 while Jose was playing for the Kansas City T-Bones.