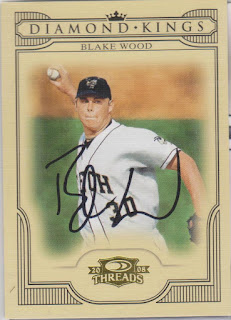 Here is the first of three cards from this set's Diamond Kings insert set. I don't remember pulling any of these inserts out of packs in 2008, so I think I bought them all just to get signed. As far as Diamond Kings go, they are pretty lackluster compared to the Diamond Kings I collected as a kid. That is Panini for you, though.

When I was looking at stats, I was shocked to see how much Blake has pitched in the Majors. He has pitched in the big leagues every year since 2010, except for 2012 and 2015. Over that time, he has pitched in 270 games with the Royals, Indians, Reds, and Angels. Despite pitching in so many games, Blake only has one Major League card- a 2010 Bowman card.

Over Blake's 270 games, he is 16-16 with 2 saves and a 4.47 ERA. His best season was probably with the Reds in 2016. That year, he had single season highs in games, innings, and strikeouts. He even managed to strikeout more than a batter an inning in the process.

I have always said that signing autographs is good karma. It seems that Major League players that sign autographs for me tend to have good games. That was certainly true in 2010 when Blake signed this card for me. Blake entered the game in the ninth inning with his Royals trailing by one run. Despite giving up two singles, he managed to get an inning ending double play and come out of the inning unscathed. When the Royals came up in the bottom half of the inning, they won the contest on an Alex Gordon walk-off home run and Blake picked up his first Major League win.

Sadly, I did not attend that game. I drove up to Kansas City in the morning and got autographs as players were entering the ballpark. Once I got what I could get, I grabbed some Chipotle and headed home.