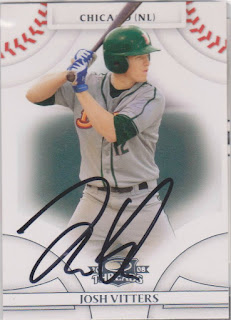 Here is another card that I got signed at the 2009 Futures Game in St. Louis. Josh was representing the USA club and was nice enough to sign three cards for me that day. A year later, he would sign two more cards for me at the Rickwood Classic in Birmingham.

Josh, a former number three pick by the Cubs, would only play in 36 Major League games. In 2012, he was tearing up the Pacific Coast League. Through 110 games, the twenty-two year old was hitting .304 with 17 home runs and 68 RBI. The Cubs called him up to the big leagues and he would hit just .121 in 99 at-bats over the final two months of the season.

He came back in 2016 and joined a team in the Atlantic League and he struggled. He dropped down to the American Association in 2017 and struggled there. Last season, he played in the Can-Am League and could only muster a .247 average at that level at the age of twenty-eight. I would be very surprised if he got signed by a team this year, but you never know.

Anymore, I only go 'graphing with a blue Sharpie. That obviously wasn't the case in 2009. But, the last two cards I posted from this set were signed in black and they both look great. Some sets are just like that.