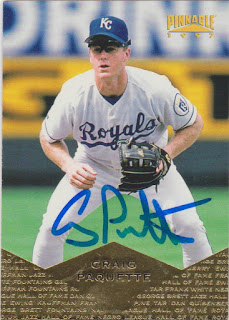 Here is another former Royal player that I was able to get through the mail earlier this year. I sent this card to Craig in January and I had it back eight days after I sent it.

Craig played in the Majors for eleven seasons with the A's, Royals, Mets, Cardinals, and Tigers. He could play just about anywhere, but spent most of his time at a corner infield or outfield spot. For his career, he was a .239 hitter with 99 home runs and 377 RBI. He got to play in three playoff series with the Cardinals in 2000 and 2001.

Craig spent just two seasons in Kansas City. He had a career year there in his first season, 1996. That year, he mainly played third and left and he hit .259 with a career high of 22 home runs and 67 RBI. His production fell off the following year and the Royals let him walk after the 1997 season.

I did not buy very many cards in 1997. I am not even sure if I bought any from this set or not. I never noticed all the words in the gold foil on this card until I was getting ready to send it out. All of the words on the card are specific to Kansas City or the Royals. Some of the things on there are- George Brett, fountains, Ewing Kauffman, and Negro League Hall of Fame. That is kind of cool. I am have tempted to see if I have any other cards from that set just to see what it says for other teams.