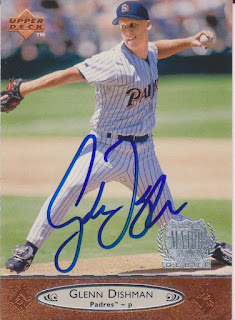 Here is a card of Glenn Dishman that was given to me by Rod, from Padrographs, when we met up at a Hillsboro Hops game in 2015.

Glenn pitched in the Majors for three seasons with the Padres, Phillies, and Tigers. He made his Major League debut with the Padres in 1995 and saw the majority of his big league action that season. He appeared in 19 games, starting 16, and pitched 97 innings with a 4-8 record and 5.01 ERA.

He would go on to only throw 38 more innings at that level over two more seasons. Glenn finished his career with a record of 5-10 and a 5.25 ERA.

Glenn is now into coaching and is currently working as the pitching coach for the Giants AA team in Richmond.
at 10:27 AM