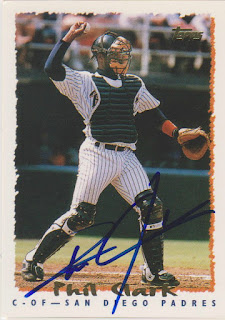 Here is another Padrograph that was given to me by Rod when we met up at a Hillsboro Hops game in 2015. Rod has always sent me goodies in the mail and that hospitality was carried over when we finally met.

Phil played in the Majors for parts of five seasons with the Tigers, Padres, and Red Sox. The former first round pick made his big league debut with the Tigers in 1992 and did very well in limited action. He would get 54 at-bats and hit a robust .407 with a home run and 5 driven in. That home run came in his first start and just his second Major League game.

Phil wound up in San Diego in 1993 and he had his best season in the Majors. He got into a career high 102 games and he hit .313 in 240 at-bats with 9 dingers and 33 RBI. He would play two more seasons with the Padres after that, but his at-bats dwindled each year as he only hit about .215 for those two seasons.

He wound up with the Red Sox organization in 1996 and spent most of the year at AAA. He did get into three games with the Sox and he went 0-3 to end his Major League career. The Sox then sold him to the Kintetsu Buffaloes and he would go on to have three monstrous seasons in Japan. In 1998, Phil hit .320 with 31 home runs and 114 RBI. He also had 48 doubles that season, which was a record that stood for just three seasons.

Phil is currently the assistant hitting coach for the Detroit Tigers.
at 11:29 AM